Jhalak M. Kakkar is Executive Director at the Centre for Communication Governance at National Law University Delhi. She leads the work at CCG across pressing information law and policy issues such as data governance and privacy, platform regulation, governance of artificial intelligence, misinformation, and surveillance.

At CCG, her research focuses on AI regulation and data governance, providing policy input on government regulatory proposals and on academic research projects around AI policy and regulation (privacy, big data, bias, transparency and accountability). Jhalak is the Indian representative at the Asian Dialogue on AI Governance (a collaborative initiative between the Singapore Management University and Microsoft).

Prior to this role, she was a Visiting Researcher at Harvard Law School (HLS) focused on the governance of artificial intelligence, mass surveillance and facial recognition, and the regulation of fintech and blockchain. She has also served as an Editor on the Harvard Journal for Law and Technology. Additionally, she was part of the founding Board of the HLS Blockchain and Fintech Initiative and has since been an advisor to the Board.

Jhalak began her career at PRS Legislative Research, New Delhi, India, and spent six years at PRS working across various roles to provide non-partisan analysis to Indian federal and state legislators on policy, budgets and legislation. She led PRS’ engagement with Members of Parliament and provided them with analytical input and briefings on a cross-section of legislative and policy issues. Before this role, she was an analyst with the research team at PRS tracking legislation, budgets and policy on science, technology, strategic affairs, and natural resources.

Jhalak has graduated with an LLM from Harvard Law School, Cambridge, USA on a Fulbright-Nehru Masters Fellowship. She has a five-year integrated social science and law degree from the National University of Juridical Sciences, Kolkata, India. 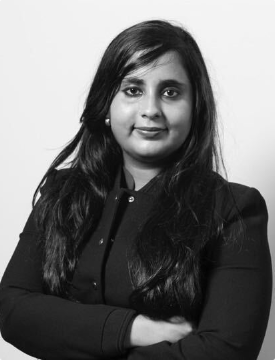